They have not lost a game (in Georgia) and post a Georgia record of 90 wins and 0 Losses during this championship run! In 2018, The Westlake Girls lost 1 game in Florida and 1 Game in NY at the Geico National Tournament. They were undefeated in 2019 with a record of 30-0 and in 2020 they went 30-2 to include their 3rd straight GHSA Championship! The Maxpreps / GACA Coaching Staff Spotlight is LaGrange High School Football from 2002.  The 2002 LaGrange High School Football Staff, under the leadership of GACA Hall of Fame Inductee Steve Pardue (2020), posted a record of 26 wins and 1 loss to include a GHSA State Championship in 2001! LaGrange Football suffered its only loss in those two years to Screven County in 2002 as they were defeated by one point 15-14 to be eliminated from back to back state championships. The Maxpreps / GACA Coaching Staff Spotlight is Blessed Trinity High School Football from 2014-2019.  Blessed Trinity High School Football is on a “HOT” streak that in the past 6 years has compiled a record of 79-7 with 3 State Championships and 5 Region Championships! The Head Coach during this period of success is Coach Tim McFarlin and there have been few changes over the years on his staff. Below is the 2018 Staff in the Dome of the GHSA State Championship game. This picture also includes administrators and support staff. 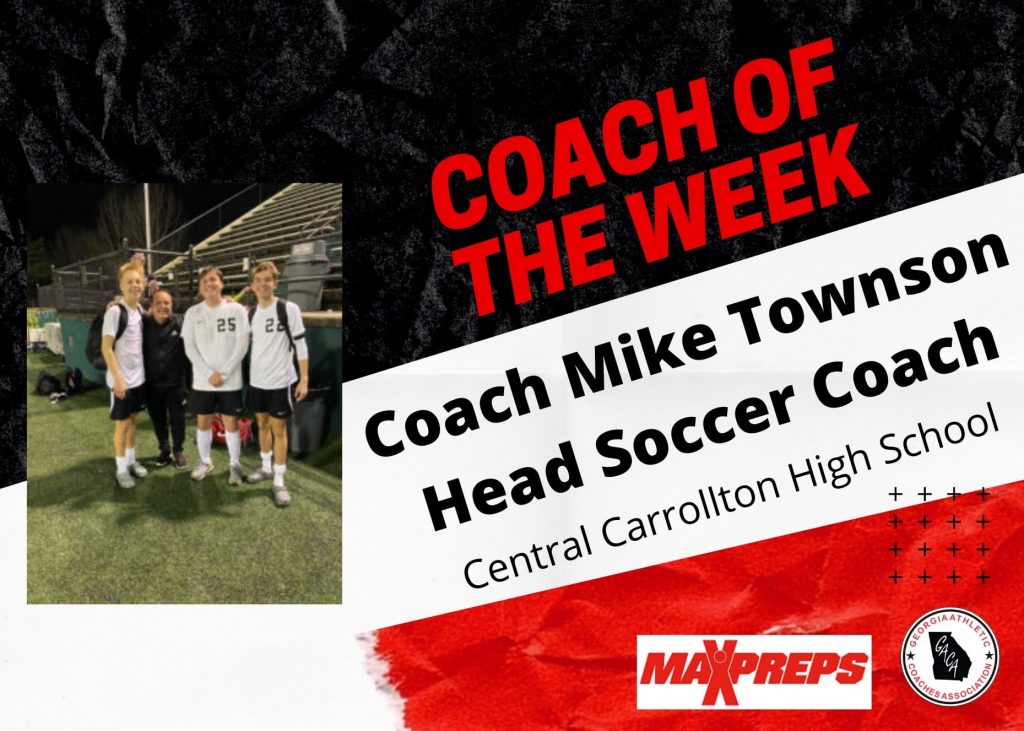 The Maxpreps / GACA Coach of the week is Head Soccer Coach at Central Carrollton. 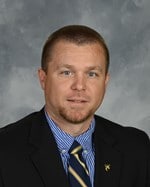 Coach Strickland has been coaching for 14 years, 8 years as a head coach and is in his third year as head coach of the Thomas County Central Yellow Jackets. In his time as the head coach for Central, they are 46-28. More importantly, under his leadership players have developed confidence in playing the game in a professional manner while having fun as well as impacting the school community through participation in service projects such as Bows for Childhood Cancer, encouragement of social interactions through Baseball/Special Education events, and assistance in numerous local charity events.

The team has been awarded academic honors from the American Baseball Coaches Association for the past two years in addition to National Field of the Year honors for 2019-2020 from the American Baseball Coaches Association. In addition to his dedicating his time on the athletic field, Coach Strickland teaches Honors and AP Chemistry as well as Physical Science during the school day, being honored as Teacher of the Year in 2017 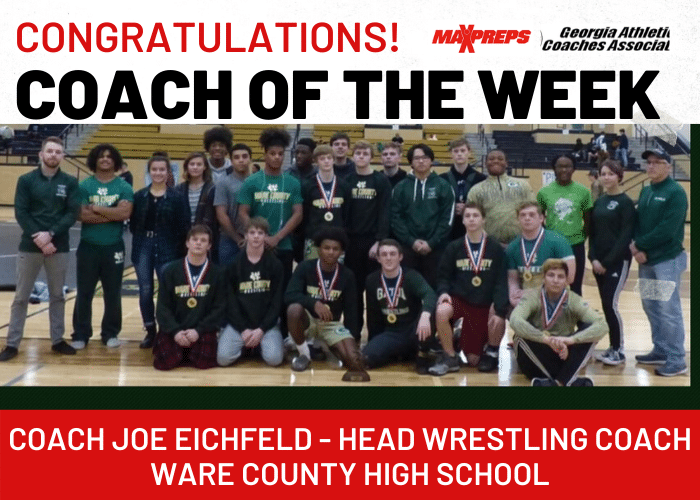 Coach Eichfield is a long time High School Wrestling coach in Georgia and his Ware County Gators wrapped up the Region Traditional Championship last weekend at Wayne County High School.  The Gators also finished as Area Dual Champions and placed 6th in the GHSA state duals in their AAAAA Classification. 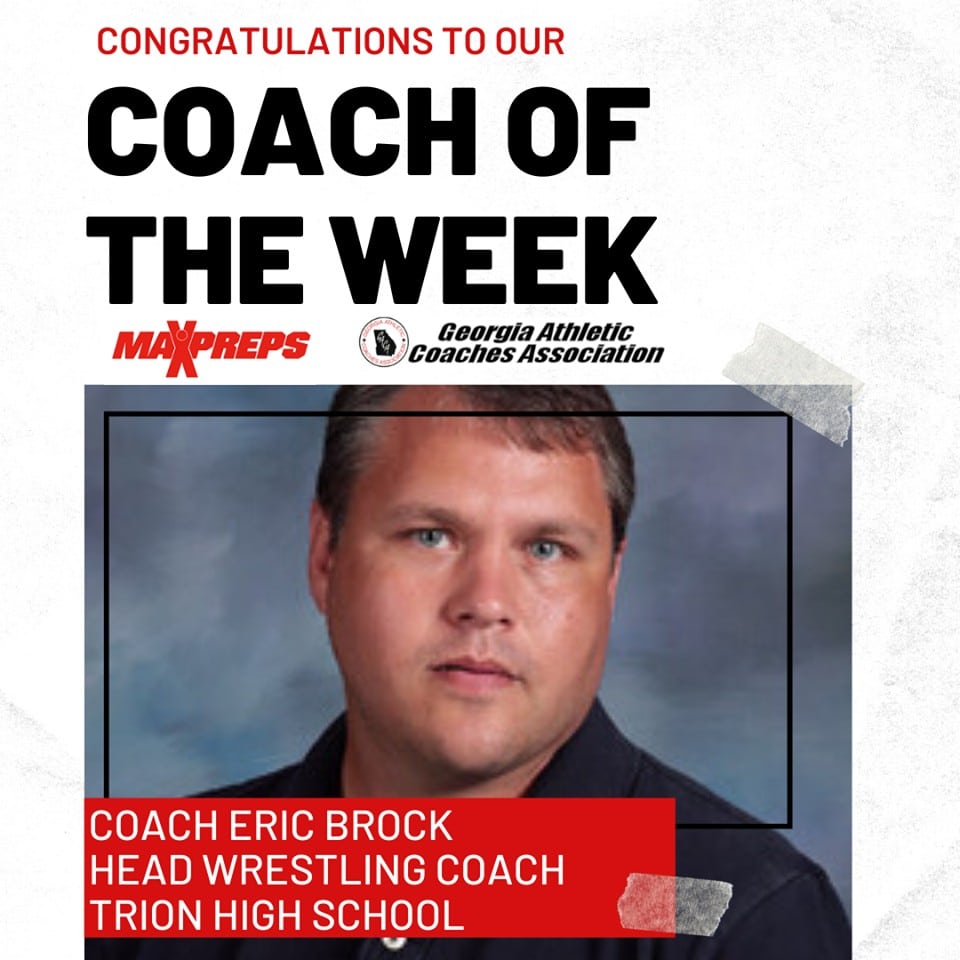 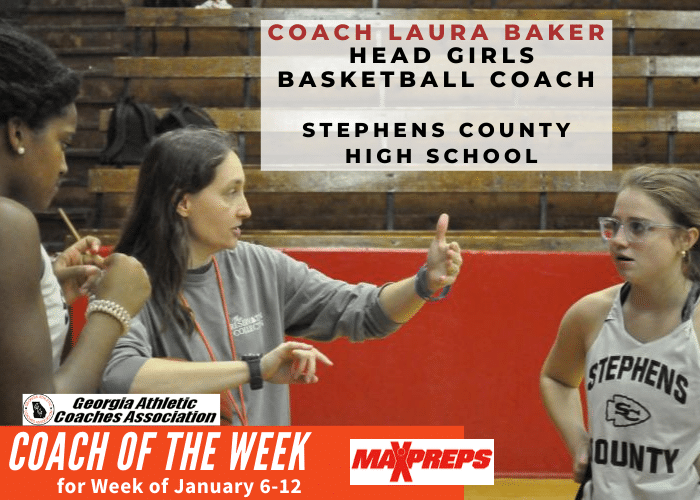 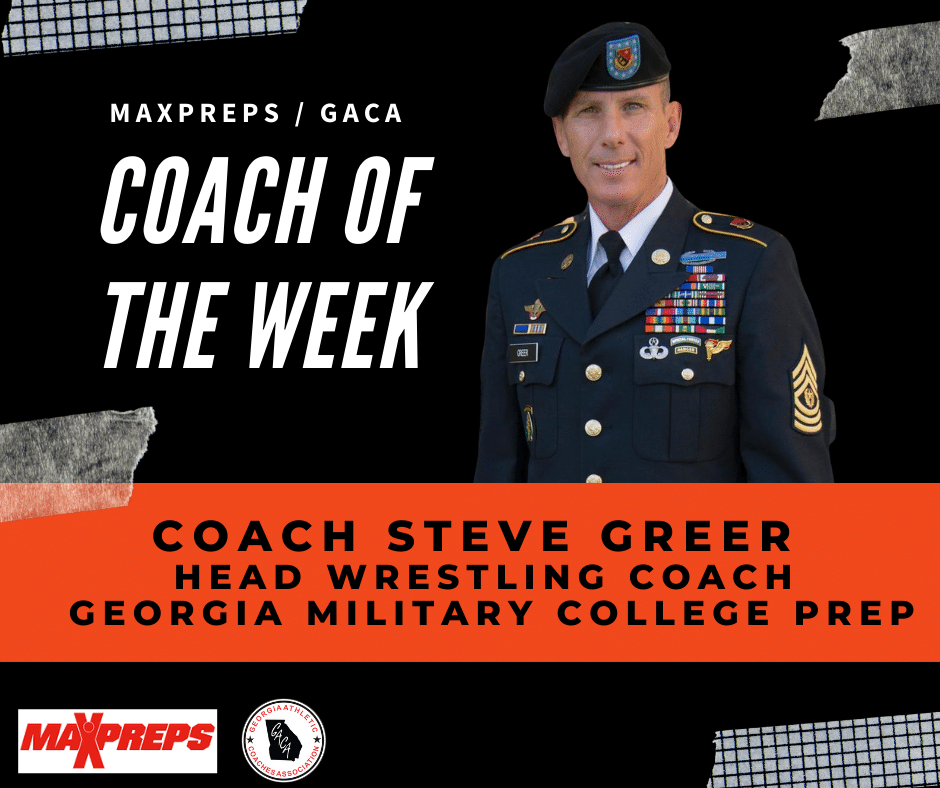 Coach Steve Greer, Head Wrestling Coach at Georgia Military College Prep, is the MaxPreps/GACA Coach of the Week.
Dr. Steve Greer, Command Sergeant Major, US Army (Ret), is the Head Wrestling Coach and Associate Principal for Georgia Military College’s (GMC) Prep School. Greer is responsible for cadet discipline and supporting all athletic programs. Greer refers to himself as an “Army brat.” He was born in Fort Campbell, KY., during his father’s deployment to Vietnam. Greer spent many years in Northern Virginia while his father was assigned to various positions at the Pentagon, Fort Belvoir, and the Washington D.C. metro area. He’s made education a top priority and says he is huge fan of life-long learning.
In 2008, he graduated from Capella University with a PhD in Education. “During my 20 years in the Army, I managed to complete an Associates, Bachelor’s, and Master’s degree while juggling some very challenging assignments as an Army Ranger and Special Forces soldier. Before coming to GMC, Greer served for eight years as an Army JROTC Senior Army Instructor at Dodge County High School in Eastman, Ga. He also started and coached the wrestling program at the school for both middle and high school teams. In 2011, Greer was a Top 10 Georgia Teacher of the Year Finalist. He is married to his wife, Jennifer, who is a former soldier. They have two children, Aiden, 16, and Abby,14. 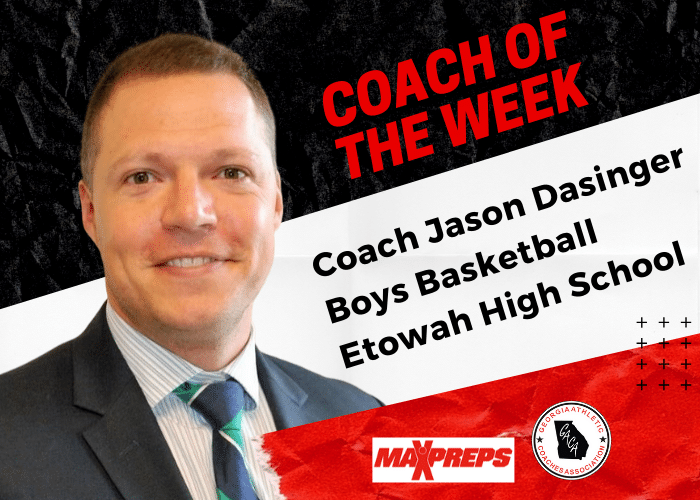 Coach Dasinger is the Head Boys basketball coach and government teacher at Etowah High School. He has been coaching and teaching for 10 years(9 years at Pope High School and 1 year at Alpharetta High School). While at Alpharetta High School, He led the basketball team to their best record in school history(25-4). Coach Dasinger was also named Region 6 coach of the year. Coach Jason Dasinger was offered and accepted the head job at Etowah High School after one year at Alpharetta. During his first year at Etowah, Coach Dasinger went 24-3 winning the Region Tournament and was also named the 2018 Region Coach of the Year.  The 2019 Etowah program is off to a fast start with a record of 6-1 after suffering their first loss on Saturday December 7th to South Forsyth. 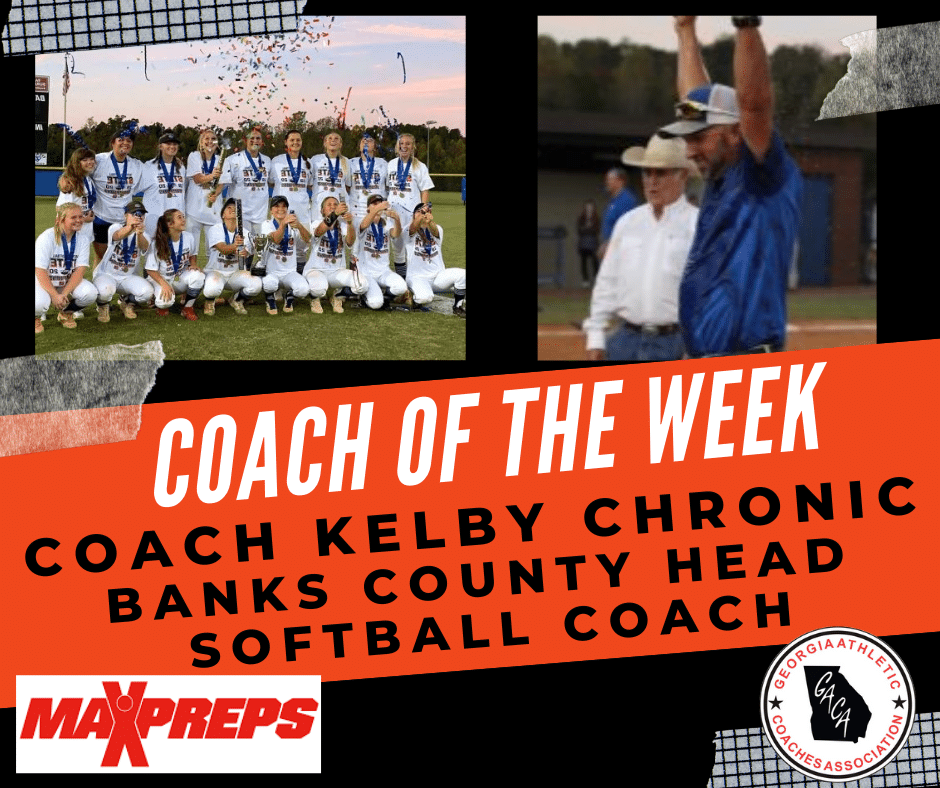 Congrats to Coach Kelby Chronic, Banks County Head Softball Coach for being chosen GACA/MaxPreps Coach of the Week and for winning the 1st Softball State Championship in Banks County history!

First year head coach who loves his girls and always puts them first lead his the Banks County softball team in the playoffs that included wins over Bremen, Lamar County, and Rockmart in the Championship Brackets in Columbus! 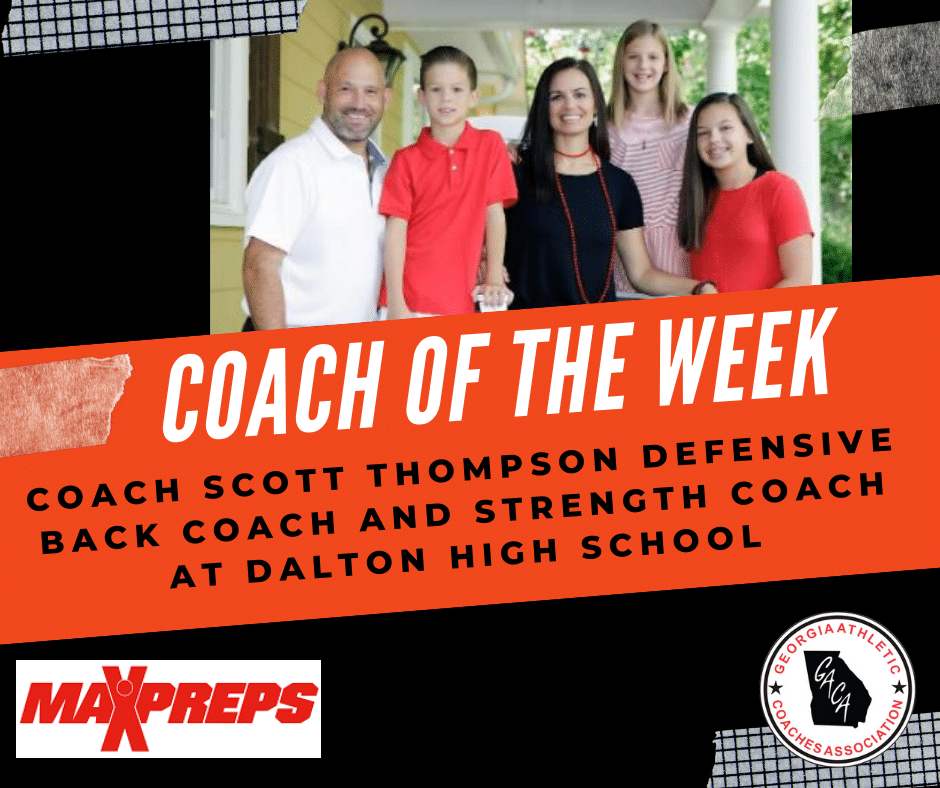 Coach Thompson is our defensive back coach and strength coach at Dalton High School. He builds great relationships with his students and players. Over the years, I have watch him have to discipline his students and before the conversation is over, I have heard him tell each one that he loves them. He truly has a passion for kids and our students. 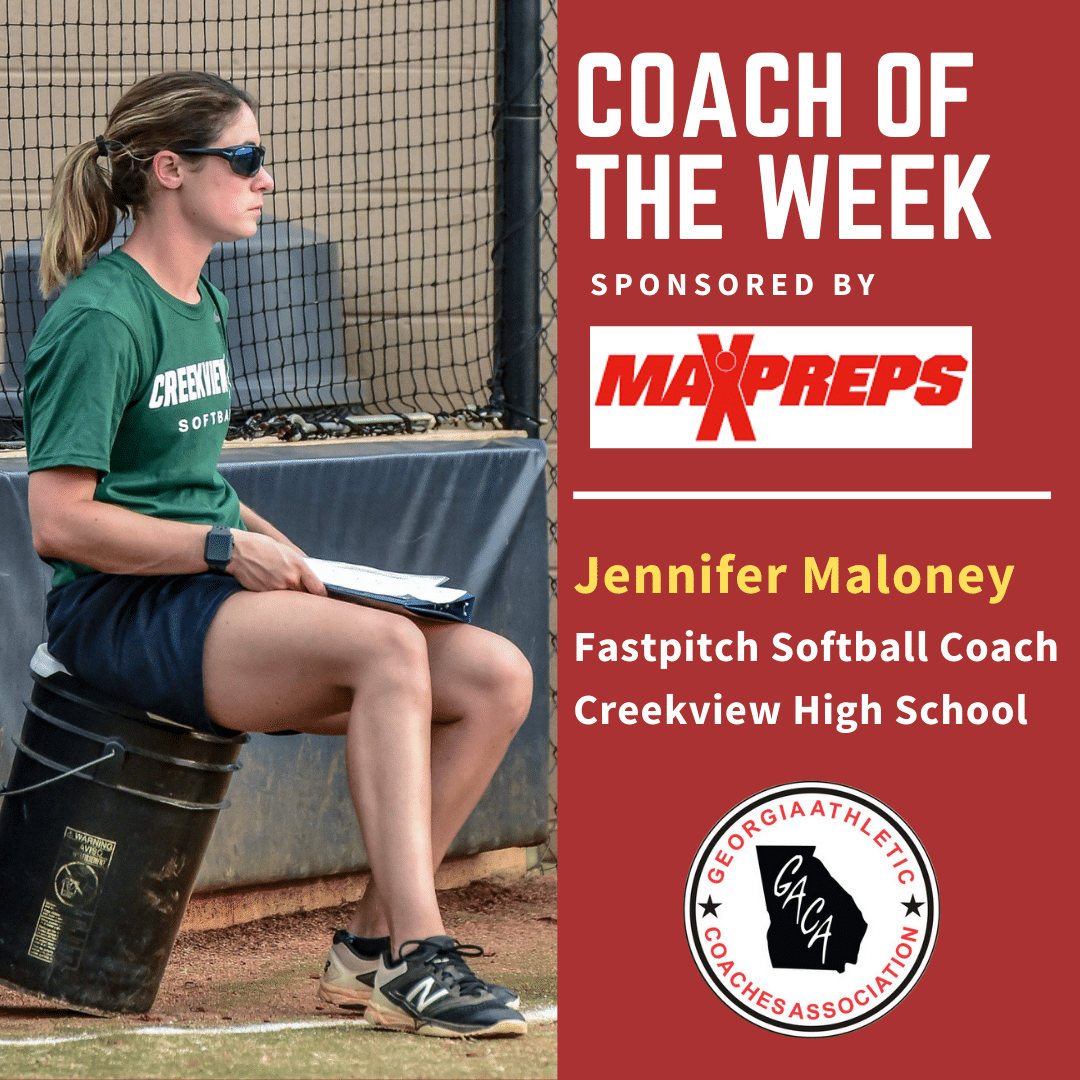 I am nominating Richard King (assistant coach) for Parkview ladies cross country. He is listed as “assistant” but has been the unoﬃcial “head” girls coach for a long time. Richard helped lead our girls to the Gwinnett County Championship, the ﬁrst women’s team title since 1997 (he was coaching for us then, too!!!). He has been a coach with our XC and T&F programs since 1994. He is a pillar of the community and a tremendous asset. Our XC program does not have a “stats” page, but I included the Gwinnett Daily Post article about our ladies winning. 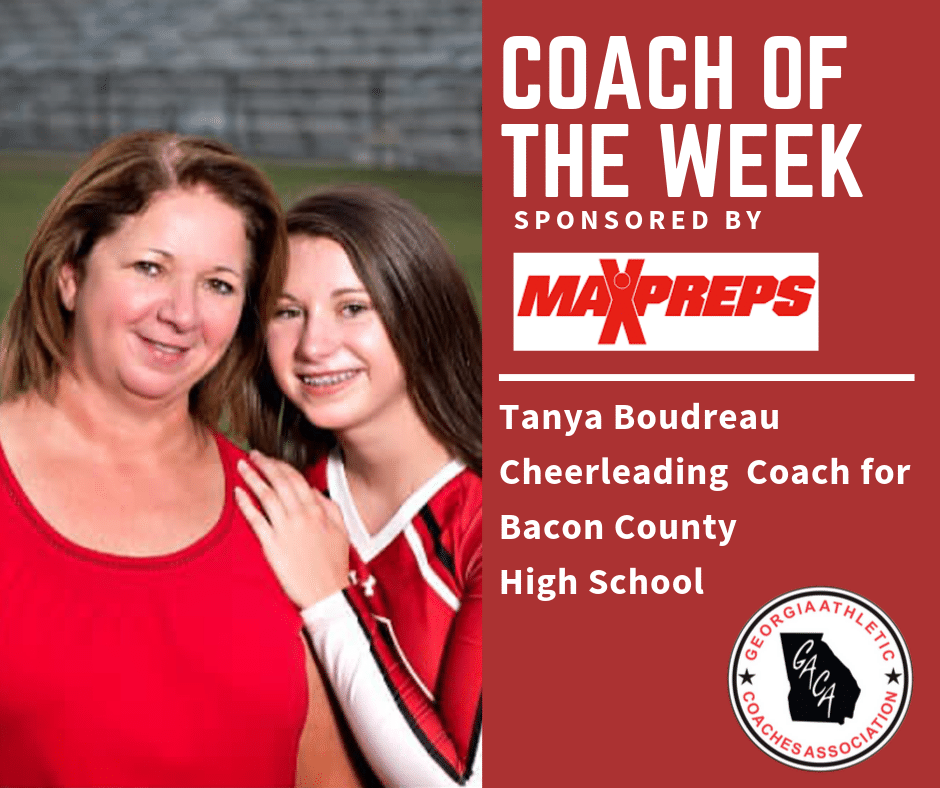 Coach Boudreau has been coaching for many years but over the past 5 I have seen the quality of her athletes change tremendously. Her team this year looks amazingly strong and will ﬁnd their way to the top. Her daughter graduated last year and many thought she would retire from coaching. However, she continues to lead her athletes with greater diﬃculty and stamina to ﬁnd their way to the ﬂoor at State 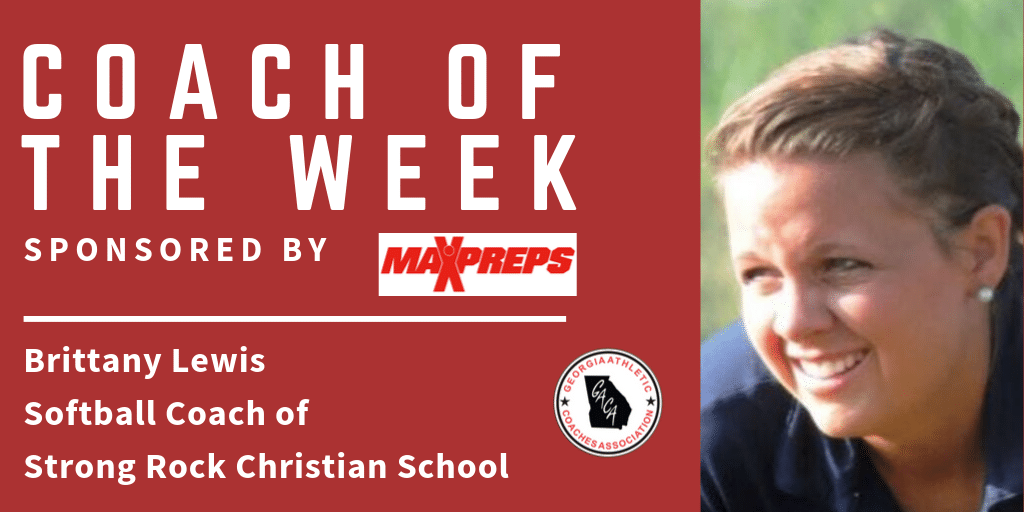 Brittany Lewis was hired this year to take over a struggling program at Strong Rock Christian School. Last year the program went 7-11. She has no seniors on this year’s team and seven freshman, six of which that start. The season has been one of growth, development, and creating a new mindset to win. Their current record is 17-9, 6-1 in region play, and they just ﬁnished runner up last weekend in the top Diamond Division of the Morgan County Bulldog Classic against all large classiﬁcation public schools. Strong Rock has secured the 2 seed headed into the region 5-A tournament and is experiencing a very surprising turn around this year under new leadership. 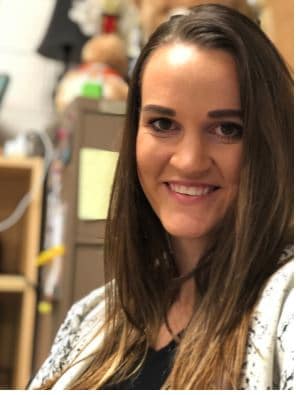 In partnership with GHSA’s September Cancer Awareness Month, Coach Ikerd organized a special fundraiser and planned a memorial night to honor a local community member and Northwest Whitﬁeld graduate who passed away from Pancreatic Cancer in Feb. 2019. Donations for the National Pancreatic Cancer Foundation were collected totaling over $300. She also led her team to two region victories on the special night. 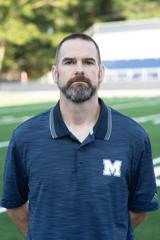 Jason Allen is entering his fourth season with the Blue Devils, and his 17th season coaching high school football. Coach Allen is a big reason that the Marietta Blue Devils are oﬀ to a 3-0 start with wins over Rome, St. Joseph’s Prep (Philadelphia, PA), and Collins Hill on Friday Night! Jason Allen is the Defensive Coordinator and Inside Linebacker Coach this season. Prior to Marietta, Coach Allen was the Head Football Coach at Potomac Falls High School in Sterling, Virginia from 2013-2015. He led the Panthers to three straight play-oﬀ appearances, and a top 10 defensive ranking in the state of Virginia among Division 5 schools. Congrats to Coach Jason Allen for being selected as the GACA / MaxPreps Coach of the Week! Thank you all for your nominations and remember to nominate your coaches in Football, Softball, Cheer or Cross Country each Week! 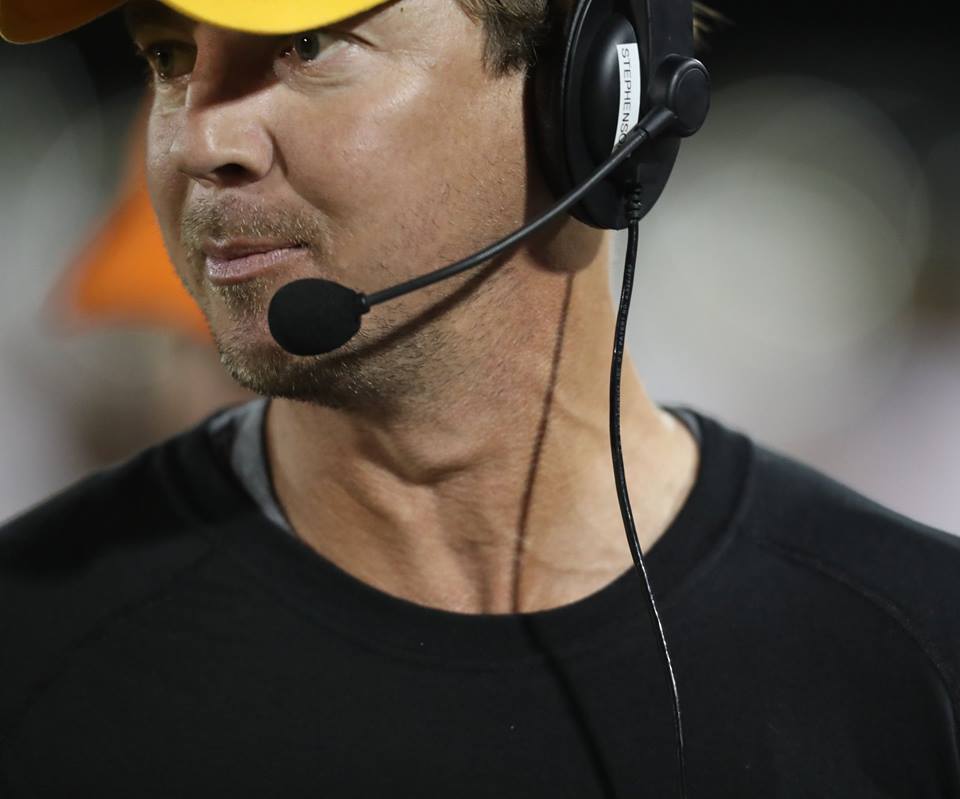 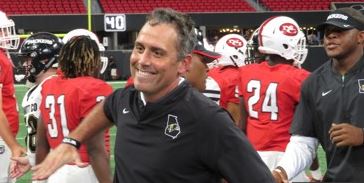 Coach Rogers opens up the Colquitt County 2019 Football Season with a 17-6 win over North Gwinnett in the Corky Kell Classic played in the Mercedez-Benz Dome in Atlanta on August 24, 2019! Coach Justin Rogers takes over a highly successful program after leaving a Jones County Football Team in which he amassed 45 wins and only 15 loses in the 4 years as Head Coach of Jones County High School in Gray Georgia. Coach Jones accepted the Head Coaching Position at Colquitt County High School in the midst of much turmoil surrounding the change in the position of head football coach at a school rich with tradition in the state and nationally.